This week started off pretty poorly but turned out to be good overall. I hit two PRs - one distance and one speed. The 5k on the 4th of July was quite a bit faster than I expected to be given my training of mostly easy miles. The long run this week went well with very little joint pain and just some soreness in my calves. I’m feeling much better about my runs and my calves are recovering much more quickly than they were in the previous few weeks.

Monday was rough. I ran an average pace of 9:38 and my average heart rate was 167 bpm. The 167 bpm is pretty high for that pace for me so I’m not really sure what the contributing factors were but I struggled quite a bit. I made sure to fuel up at my one meal at lunch and drink plenty of water.

Since Monday was rough I went out and my goal was to keep my heart rate under 160 bpm for the entire five miles. I wanted to take it easy and see how I felt if I switched focus to heart rate instead of pace. My average pace ended being 9:44, starting at 9:13 and ending at 10:05, and my average heart rate was 155 bpm.

Honestly this was a much better and refreshing day than Monday. The 10 minute pace is a little rough on the knees and ankles but I didn’t feel as drained as the previous day.

Thursday was a 5k race day! I set out to come in under 24:00 and crushed it - I hit 23:18! I definitely didn’t expect to shave off a minute in a month considering I’ve mostly just been putting in easy miles and have only done two days of workouts so far. I did start off way too quickly with my first mile being 6:59 and the others slowed down to 7:42 and 7:53.

My seconday goal was to see if I could hit my estimated max heart rate using the 5k as a field test. I hit 186 according to my chest strap and my max is estimated at 190-196. I definitely wasn’t feeling completely spent and dizzy so I could’ve pushed a little more. Hoping to break into the 22:30 barrier in August! 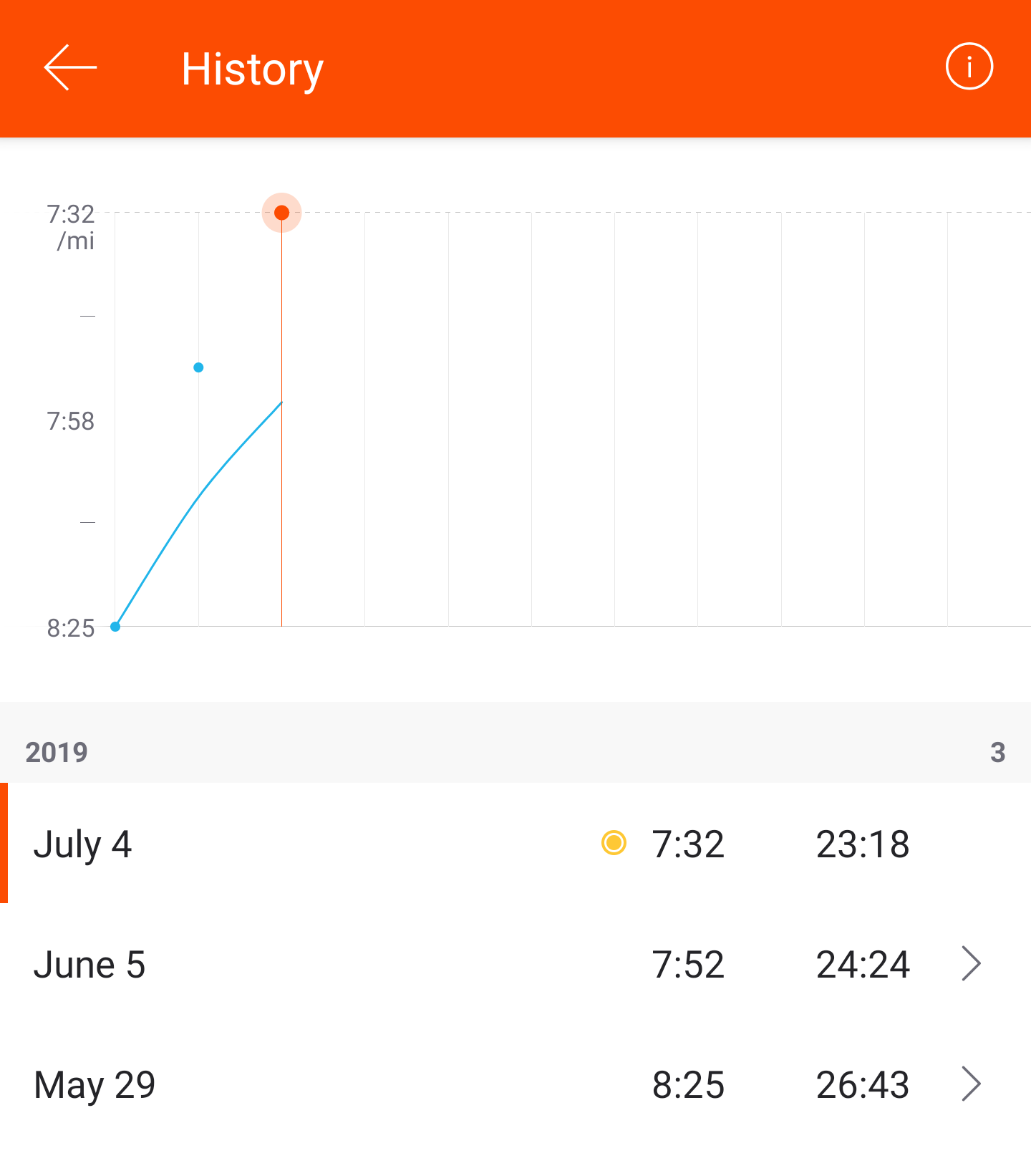 Saturday was my longest run to date - nine miles! Not only is this the longest in my half-marathon training but also the longest consecutive run of my life. I averaged 9:25 pace with 162 bpm average heart rate - a huge difference from Monday’s 9:38 at 167 bpm.

Overall I’m pretty happy with my performance here and it’s looking like I’ll be able to pass my goal pace of 9:00 for the half-marathon pretty easily. I don’t want to change my goal pace yet until I get a bit more under my belt but things are looking up and feeling better.

I was really iffy going out today. The plan called for six to seven miles but my calves were pretty sore from the nine on Saturday! So I went out with my buddy who was doing an easy four. After the first mile I loosened up quite a bit and got into the groove. We stayed steady at around 9:30 pace (other than the first mile at 9:04) and I ended with an average of 9:28. Up to this point I have taken off the day after my long runs but trying to work to only 2 rest days a week so I have to cut that out.